The ancient art of Patachitra is widely practiced in the states of West Bengal and Orissa in India. Patachitra is the confluence of two words – pata meaning cloth-based scroll and chitra meaning picture. The artists painting them are called ‘Patuas’, who sing along songs known as ‘patergaans’ to narrate the stories that they paint. 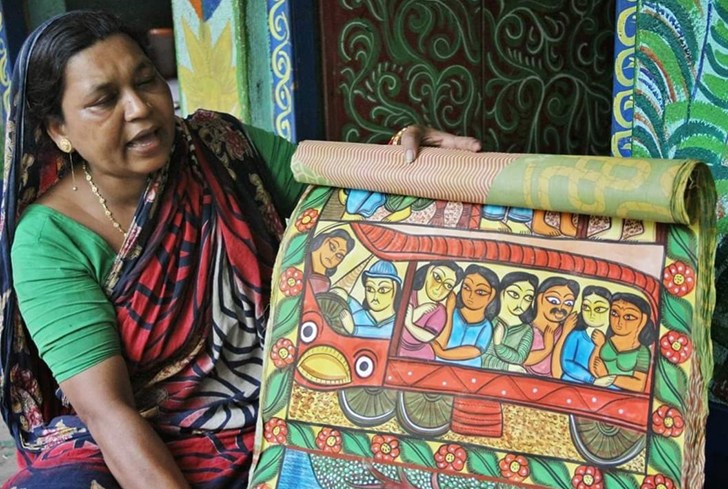 This traditional art that thrived on regaling its audiences with narratives from Hindu mythology and folklore faced a setback with the changing times, more so with the introduction of the electronic media. However, resilience proved otherwise as Patachitra is being rejuvenated since 2004 by a handful of patrons – one among them being banglatak(dot)com, along with the artists settled in the village of Naya, West Medinipur, who have taken on the surname of ‘chitrakar’ (meaning artist) as their identity. 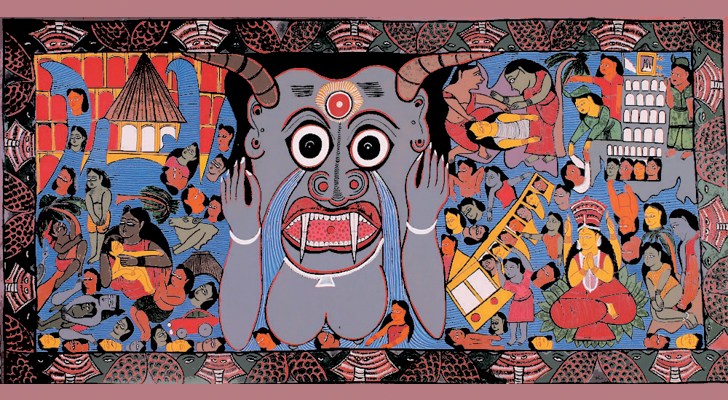 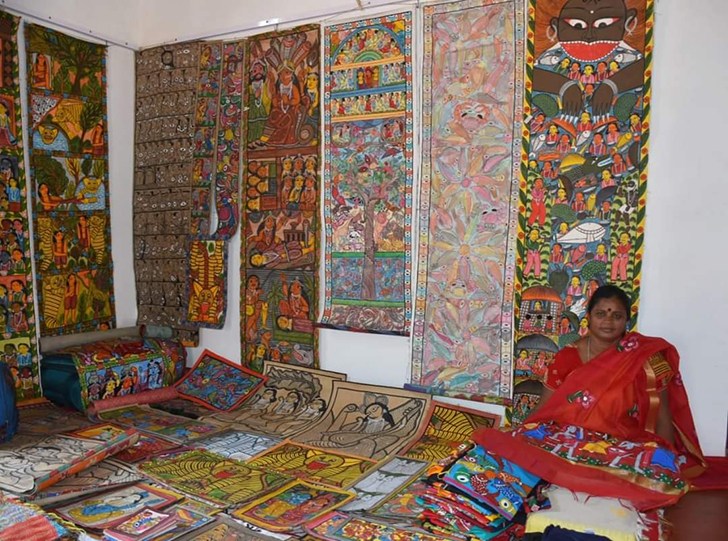 These artists have been keeping up with the times to keep their art alive. So along with mythology and religious stories, the Chitrakars address contemporary subjects like 9/11 attacks, tsunami, political affairs along with social awareness subjects like HIV Aids, plant more trees, to the latest covid-19 safety measures. Their technique, and style remain unaltered. Thus, the identity is intact, where people and incidents are seen in close juxtaposition with almost no background; a profuse use of primary colours for vibrancy and repetitive motifs for emphasis; the lines are bold, clean, angular, and sharp; flowers and foliage abound, many a times as a decorative border.

The highlight of this revival is the artists’ developing business astuteness as they extend the Patachitra into painting textiles, notebooks, bags, and the like, integrating the art form into contemporary lifestyle choices. This has helped the village to overcome poverty and led to women empowerment as women are equally adept at painting and composing the patergaaans. ‘POT MAYA’ festival organized in the village every November since 2010 has given a new platform of opportunities to the artists. Project Ethno-magic Going Global (EGG), an ongoing initiative by banglanatak (dot) com supported by the European Union has facilitated interaction between Patuas and contemporary painters and new media artists from Europe.

Recently, the art has received a geographical indication mark (GI) from government. Their many such national and international achievements have helped them to pursue the art as a source of livelihood giving them a new identity on a global level.

This office is defined by a timeless palette and tasteful restraint

One thought on “The evolving art of Patachitra”

Shayona Consultant carefully crafts this apartment in Ahmedabad, showcasing crisply curated spaces with a discerning ...
By Avni Raut
2 days ago

Wallmakers’ latest project in Kerala is a modest, unassuming two-storey home, which at close quarters, ...
By Avni Raut
4 days ago

Patachitra- the story of sustenance| Walking the right rope of maximalism| The power of the humble LED | and more.

If you can't see this ezine correctly click here If you have missed any of ...
By indiaartndesign
07/04/2021

New Meljac switches: Toggle is in!